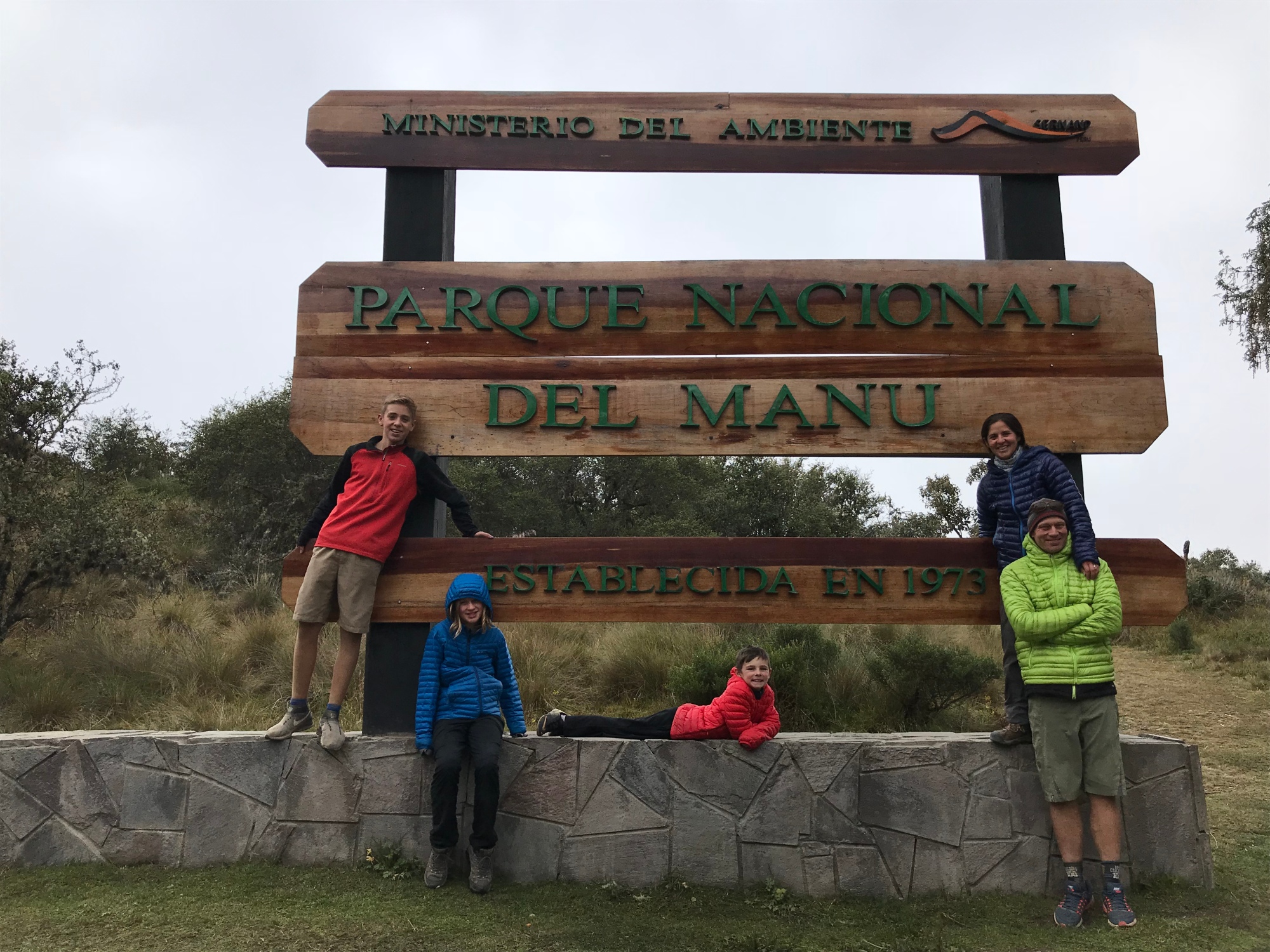 A few hours past Paucartambo, we arrived at the entrance to Manu National Park. The park was established in 1973 (a good year, Jeff says). Since then, the entire area which is roughly half the size of Switzerland has been protected. The national park spans a change in elevation from sea level all the way up to 11,000 feet. You can see from the photo that we are all wearing our down jackets. Hard to believe that just a few hours later we would be sweating through all our clothes and stripping down to take cold showers. The biodiversity in Manu is astounding. There are more ant species on one tree in Manu than in all of England. There are over 300 species of mammals in this one park, compared to 25 mammal species in all of Yosemite and Yellowstone combined. Its the real deal.

This trip required a ton of planning. My amazing Tio Hugo made all the arrangements for us. He has been taking groups into Manu since it became a national park, back when there were no lodges or infrastructure. Even when I went 20 years ago, we camped on the river banks. Very few people made the trip back then, and even now only 2,000 people per year go into the reserve zone of Manu. Compare that to the 5,000 people per day that visit Machu Picchu and it gives some perspective. For the five of us to go Hugo  coordinated a guide, a cook, a boat to take us up the river, a boatman to drive the boat, and an assistant boatman to help navigate the rivers. We traveled with a stove, a propane tank, and all the food the five of us plus the guide, cook, and boatmen would eat over the course of 7 days. We also had ground transportation and a driver before we switched to river travel. There were more people running this trip than people on it. A humbling experience to say the least.

We ate lunch at the top of mountain before entering the park. Cooper decided to go in the van instead of ride down with Jeff, so at the last minute I opted for the bike. We set off ahead of the van and descended into the cloud forest, also called the ceja de selva, which means eyebrow of the jungle. It is still mountainous, but also lush and green. 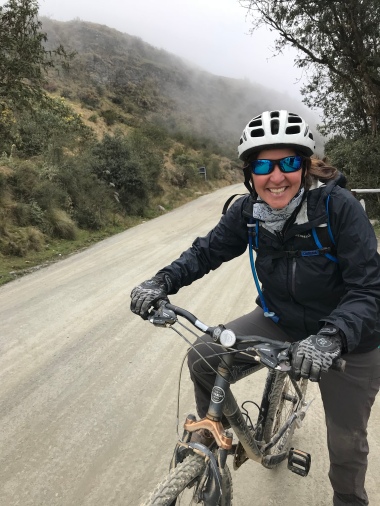 This descent on a bike is probably one of my Peru highlights. The cool wind bit our faces, the gravel crackled under the tires, the road and scenery raced by, and I found myself laughing out loud. Pure exhilaration. Jeff and I took turns passing each other, stopping every now and then to take in the incredible views of non-stop trees. We rode through the clouds and watched them below us. It was spectacular. This part of the rain forest is known for its unique flora and fauna that thrive at this elevation/climate. It is most known for the national bird called the Gallito de las Rocas or the Cock of the Rock. We were lucky enough to make it to a small viewing platform about 100 meters off the dirt road at just the right time to see this incredible bird. Twice a day the males come to their branch, clean it off, and sing and dance. 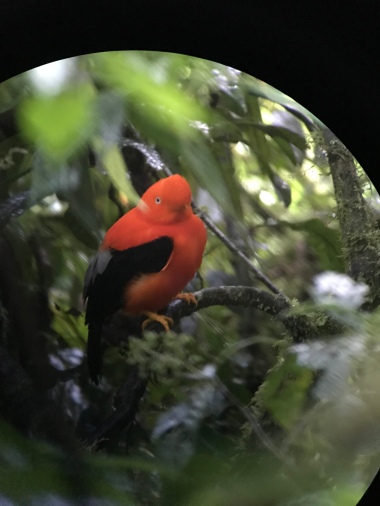 Cock of the Rock through a viewing scope.

Just put the iphone up to the scope and it looks like you are right next to the bird!

We heard it, and watched it do its crazy dance to attract the lady birds. On our way back to the van a group of brown capuchin monkeys decided to swing in the trees alongside the road. It was our first monkey sighting and everyone was excited. They were curious and unafraid so we got to see them up close. The kids loved it. Apparently there was a lodge in the vicinity that has since closed. The lodge owners had occasionally fed the monkeys so that guests could see them. The monkeys got accustomed to receiving fruit and bread so now when they see humans they associate us with food.

We finally arrived to Bambu Lodge, about an hour and half from Atalaya where we would meet our boatman the next day. The lodge was beautiful, surrounded by flowers, trees, and nicely groomed paths leading from room to room. All the rooms are on stilts to keep dry during the rainy season. And each bed has its own mosquito net. Within the first minute of entering our room, a frog jumped across the shower while I was sitting on the toilet. I screamed and then realized it was only a frog. Pretty cute one at that. Carmen named him Coco.

None of the lodges, including this one, have kitchens or on site meal prep. So Antonio our cook got to work in a makeshift kitchen, cooking up a delicious soup, chicken and rice for dinner. Seriously, this guy was amazing. Humble, quiet, soft spoken, and a master in a makeshift kitchen. At one point during the trip Charlie said, “If I had a thousand dollars I would hire Antonio to come cook for us all the time.” I tried not to take it personally that perhaps my home cooking is not up to snuff, but I also totally agreed!

Jeff shared a room with the boys that night while Carmen and I had a girls night. At one point we heard a loud thud followed by a quick voice crying out. If we were listening closer we might have heard some choice cussing coming from the boys room. While trying to figure out the hot water for the shower, Jeff had slipped on the slick tile and fallen smack down on his side. We have since determined that he likely broke a rib. To add insult to injury, there was no hot water–only cold. Not a great way to start the trip. I’ve never met a more stoic guy than Jeff when it comes to injury or illness. He powered through not only that first night, but through the whole trip without complaint.

The next morning we ate breakfast and walked around the property with Tio Hugo and our guide Rivelino. We saw coca, ginger, cinnamon, some kind of jungle lemon, and many other forgotten named fruits and plants. One of the fruits was filled with seeds that are used for orange/red dye. 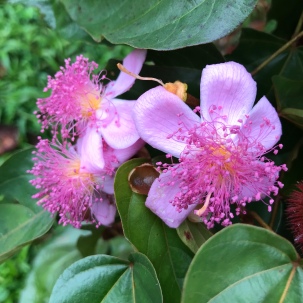 We packed up and waved goodbye to Bambu Lodge, knowing we’d be back on our way out. Time to head to Atalaya and the Alto Madre de Dios River where our boat was waiting.