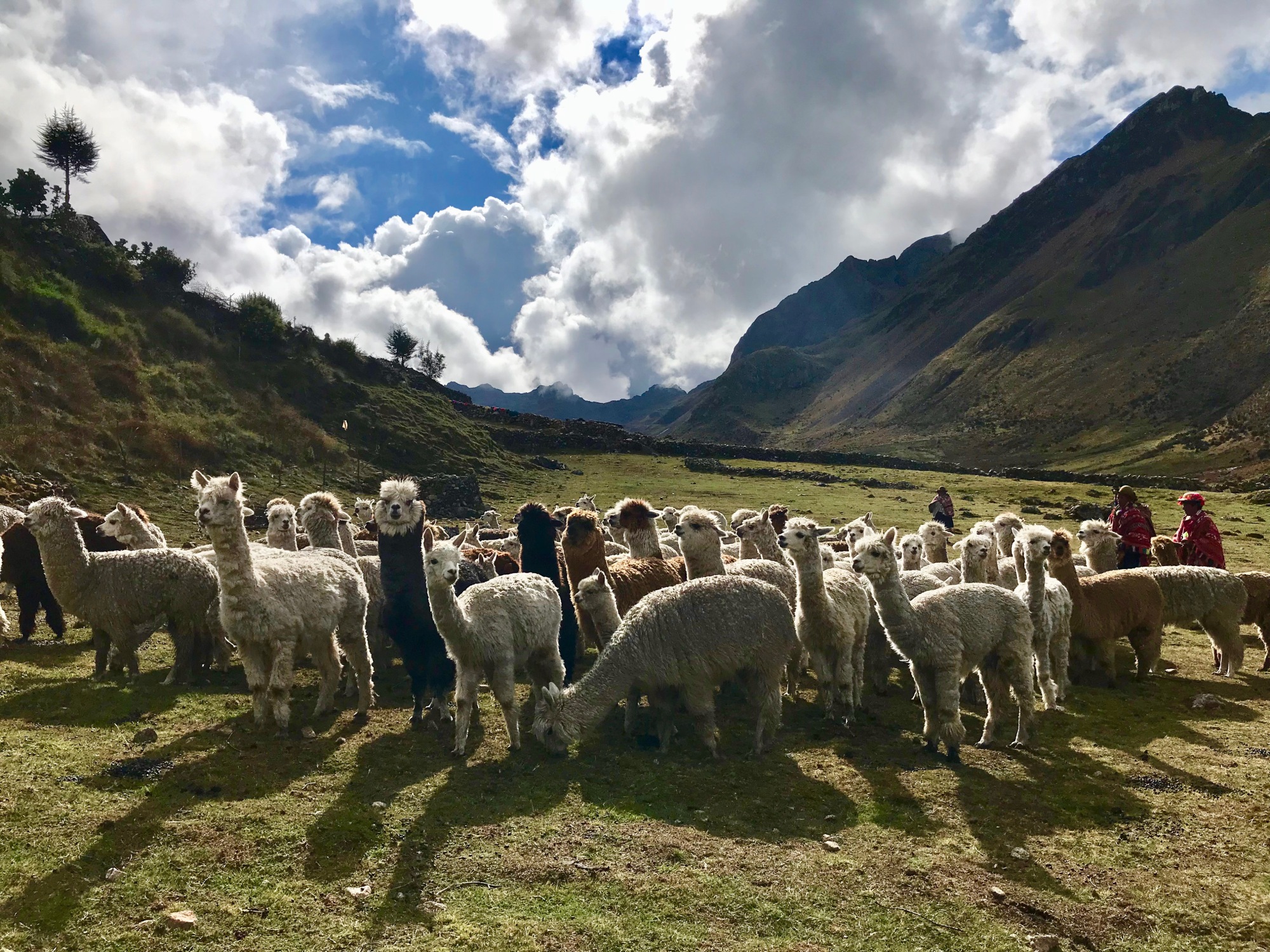 The llama is an amazing creature: beautiful, gentle, capable. Project Helping Hands partners with a local organization here in Urubamba called Llama Pack Project. It is led by a couple who founded the project in 2012 and have been working with remote communities to improve sustainable rural development, maintain environmentally friendly practices, and to improve llama breeding. The great thing about going into the small communities with Llama Pack is that they know the people well. There is a sense of community the minute we arrive. The Llama Pack folks select the communities that are in the most need to health care and public heath education. So, even though Project Helping Hands sends a medical/dental team to Peru twice a year, not every team sees the same community every time. 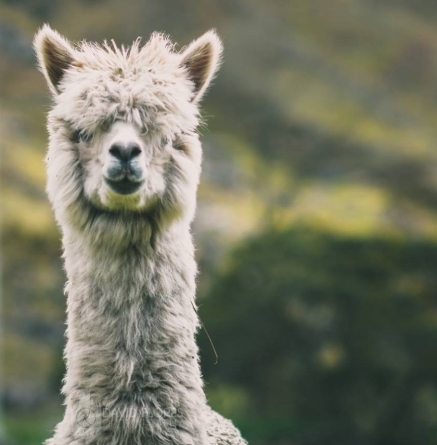 Llamas are revered in many high Andean communities because quite frankly they are the only animals that can do the work needed to help the farmers. As I mentioned in a previous post, many of the farmers work land at very high elevation, often on steep mountainsides, far from the communities in which they live. The llama is able to traverse treacherous landscapes (that horses cannot). The llama does not need to eat or drink with great frequency (cousin of the camel). And the llama leaves a delicate environmental footprint. The farmers who have potato crops high up in the rocky Andean terrain depend on llamas for the transport of their products. Our team happened to be present for the one day per year when the community celebrates the llama in preparation for the primary potato harvest. We could not have planned it if we had tried. Sometimes serendipity takes over. 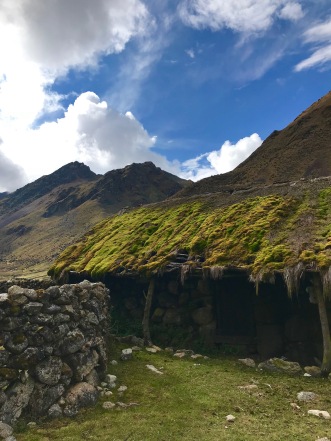 After clinic hours that day, the whole team was invited to join the llama festival. We packed up our clinic gear and donned our warmer clothes. At first we just walked up the road, past the moss covered thatched roofs of the houses, and reveled in the beautiful surroundings. The air was getting cooler and the clouds were rolling in, but the sun was still shining bright and crisp. The llamas and alpacas made funny faces at us while we tried to get closer and closer without scaring them away. Usually they would run away, while we tentatively took another step towards them, not wanting to get spit upon. Little did we know that we would be much more up close and personal with the llamas the very next morning, but that is another story.

We were ushered to a clearing behind several houses. Two men set up makeshift benches for us to sit on, and those of us that didn’t fit on the benches sat on the grass. The men were dressed in traditional ponchos, and the women in their brightly colored skirts, hats, and woven shawls. Some of the younger women that I recognized from the earlier clinic, were now in full ornamental dress whereas they had been in more Western style clothing before. It seemed like this was an important part of the ceremony–to dress the part. 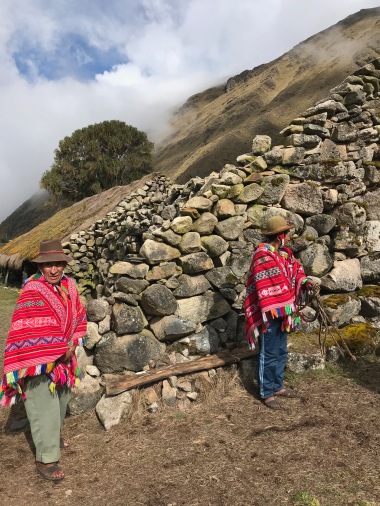 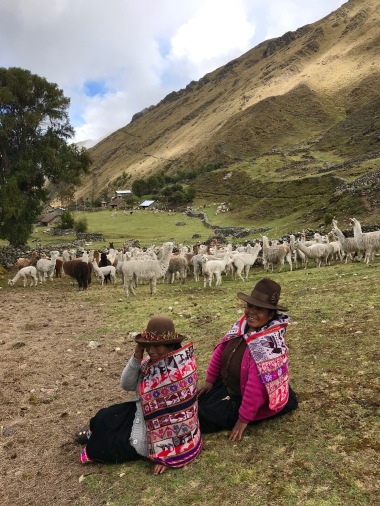 Once we had all gathered, herds of llamas descended from the mountains. Some ran, some walked, some sauntered as if they couldn’t be bothered. They filtered into the pasture just beyond the gathered group. Women and men ran behind the herds to direct them into the right place. We got a glimpse into some llama love, which was pretty hilarious happening right in the middle of the party. I guess when the urge is there. . . what better way to get the party started. 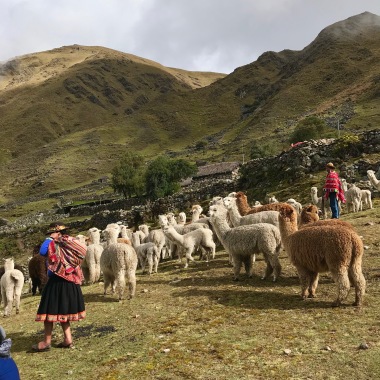 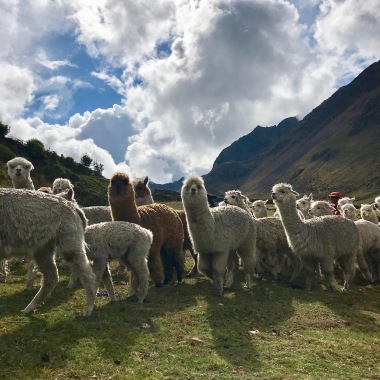 And then the party started! The men had musical instruments, coca leaves, and beer. The women were present and helped disperse the coca. The town people offered the leaves to pachamama (mother earth) by sprinkling them on the ground before chewing them. We diligently put a few in our cheeks and started chewing. Then, the beer bottle and a small carved gourd made the rounds. One of the men poured the beer into the gourd, spilled some gently into the earth for pachamama, and then passed the gourd to each person. It was a lovely ceremony of sharing, offering, and giving thanks to the earth and mountains for the gift of the llamas. 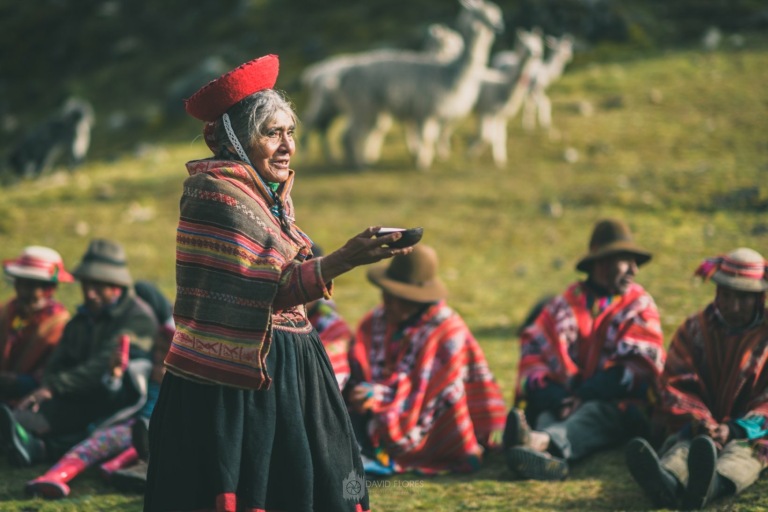 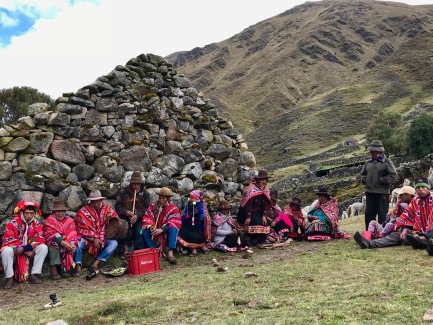 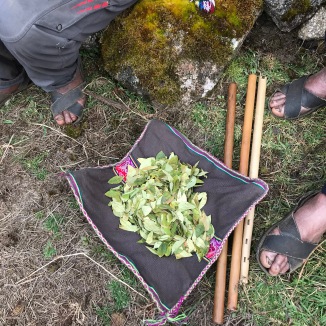 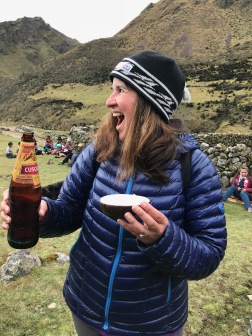 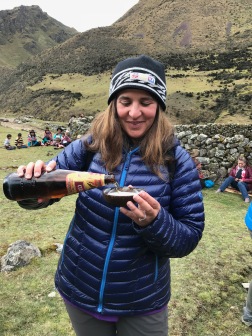 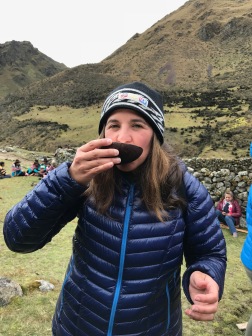 The llamas were largely forgotten as the party continued on. After the chewing and drinking had gotten underway, the dancing began. This was the highlight for me. The men and women we’d seen earlier in clinic, assumed their roles as elders and leaders, and extended their hands to members of our team to dance. The women’s role in the dance involved using a short rope and whipping the legs of the man. This made for some fun photos, and a lot of laughter and smiles amongst the team and locals. Our friend whose ears were cleaned out earlier that day in clinic, danced with Stephanie so much we joked that perhaps she had gotten married and not known it. 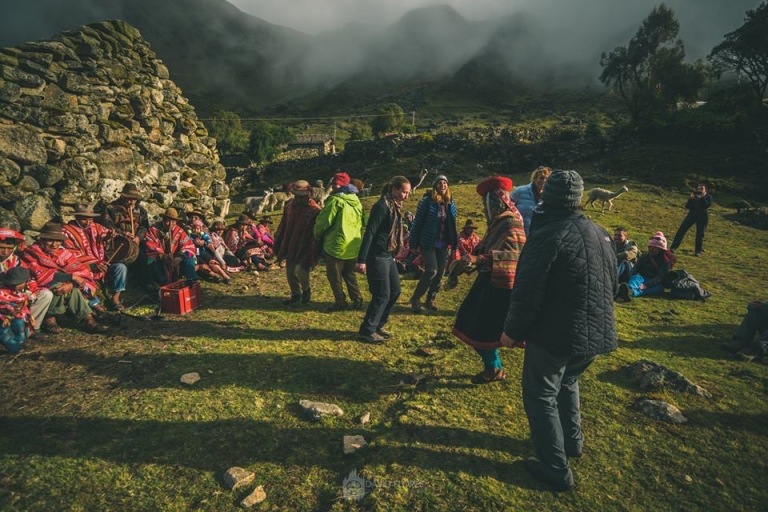 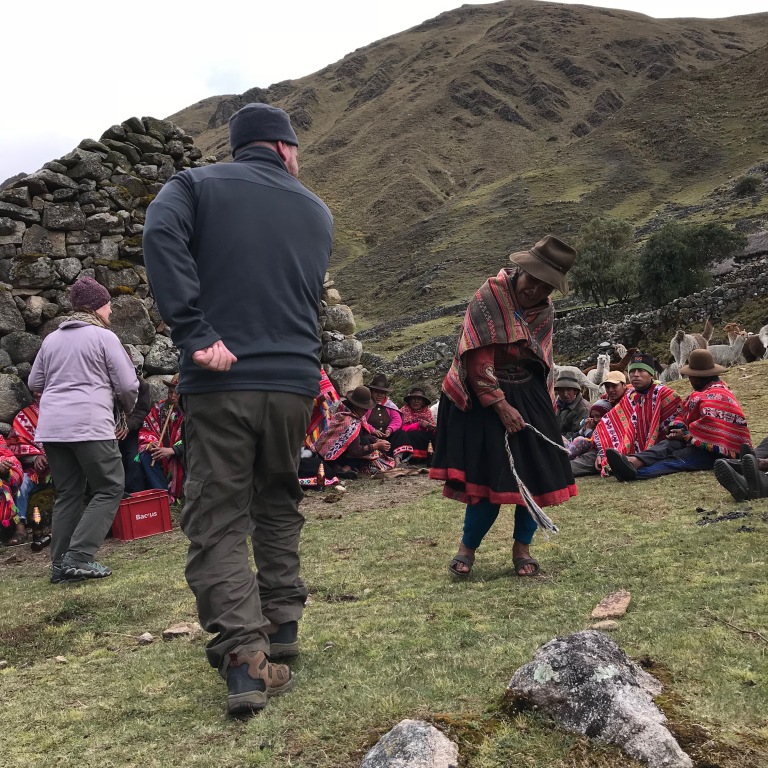 The generosity and openness of the gathered group was beautiful. You could feel the joy, the appreciation, and the love emanating from everyone present. We were invited into this yearly ceremony with open arms, as if we were meant to be there. It was like nothing I have ever experienced, and likely never will again. I felt like it was the embodiment of ayni–reciprocity with love.

When things started to wind down, some of the local community members and the medical team exchanged “costumes.” The women dressed Stephanie in the local skirts, shawl, and hat. They put a brightly colored hat on our team leader, Kim. The men exchanged ponchos for puffy down jackets. It was a moment of true cultural exchange. We drank a little more beer from the gourds, and took a group photograph of the two groups intermixed with costumes, musical instruments, and drinks. 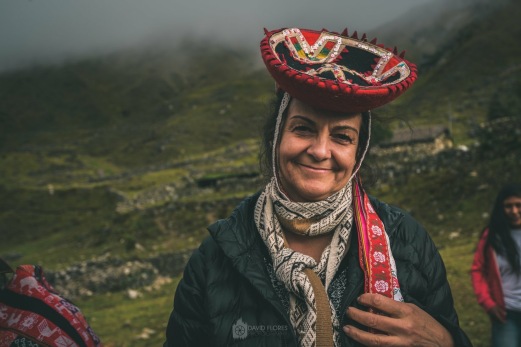 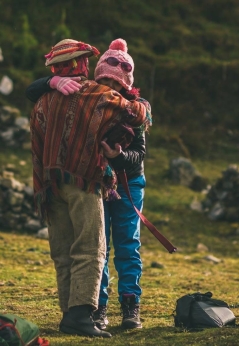 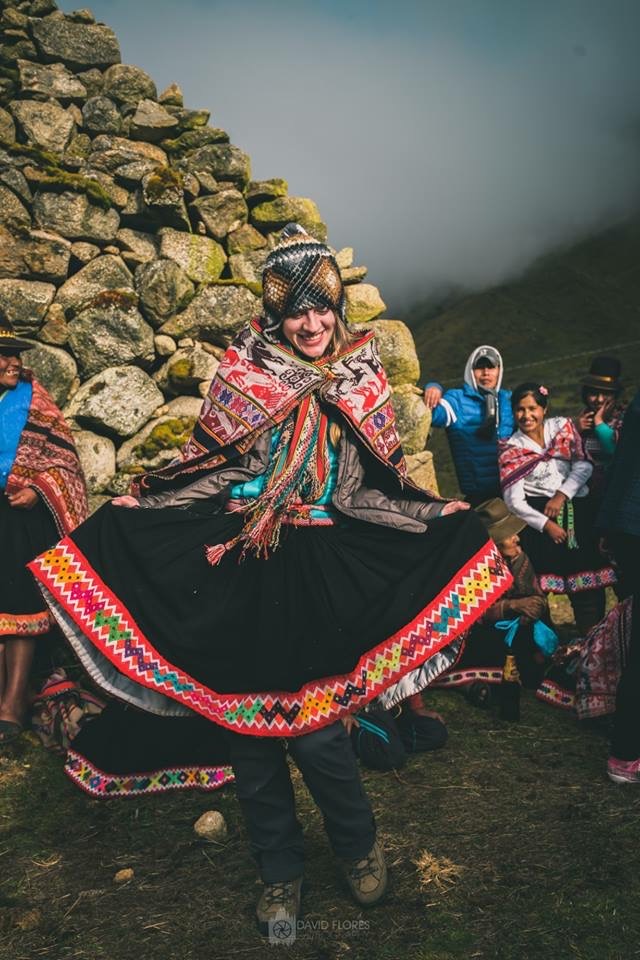 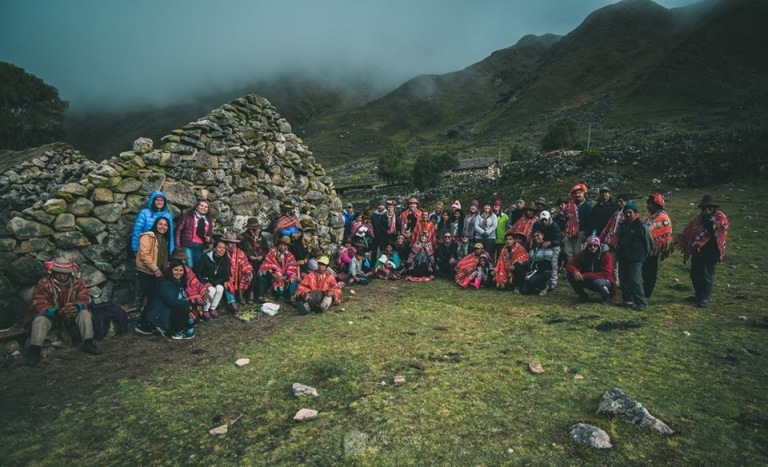 The medical team filtered out, and the locals remained to finish the ceremony without us. It is hard for me to find the right words to express the gratitude I have for being a part of the afternoon events. I’ve been to Peru many times. I’ve worked on many medical teams. And although I know I experienced something similar when I was a child going with my dad to a small community, I don’t remember much about that. Maybe those experiences I had as a child are embedded deep in my brain and heart, and were awakened that afternoon in Cochayoc. Whatever blending of past, present, and future it was, that afternoon was an experience that will stay with me always.

*You may notice some of the photos in this post have a logo for David Flores embedded in the image. David was one our team members who also happens to be a professional photographer. He was generous enough to share many of his images with the team. I have interspersed them with my own. Find him on Instagram at wanderlust_shot Travel Photography.