The moment I got to Cochayoc I knew something had changed for me. I don’t know if it was that this small community was at the end of a road, or that the valley in which it sat was so beautiful, or that I felt like a real PHH team member. Whatever it was, I sensed a openness in myself and the people around me that I hadn’t acknowledged before.

By now the “set up a clinic in a school” drill was pretty routine since we’d done it at Sillacancha, and improved upon it in Cachin. We were starting to feel like a well oiled machine. The principal of the school assigned us dental and medical classrooms, and as always the dentists were up and running quickly. On the medical side of things, we had a classroom that already had a divider in it. It made for a smaller clinic area, but we could put the pharmacy and a physical exam station behind closed doors in case we needed to do a more private physical exam. (In Sillacancha Jeff reduced a prolapsed uterus in an elderly woman. . . you just never know what is going to walk through the door). We quickly had the medical stations up and running, several inside the classroom and one outside.

Things just felt smoother and more organized. It didn’t hurt that the sun was shining, the sky was bright blue with giant cotton ball clouds, and the river glistened in the green valley below.

Time to get to work.

There was a palpable spirit in the patients I saw that day. In general I’d say the people of Cochayoc were joyful. They were quick to smile, quick to communicate, and quick to hug or touch with kindness. One of my great joys in the medical clinic was being able to offer a vision screening for the adults. Although our capabilities were limited to reading glasses only, for someone who genuinely needs reading glasses this was like magic. I had an eye chart which made it easier for me to determine which level of correction was needed, but mostly I used a thin bible that had randomly been given to me when I bought pastries at a bakery in Urubamba. I had a selection of glasses (+1.25, +1.50, +2.00, etc) and I’d have the patients select one pair at a time to read the bible passages. When they found just the right strength of glasses their eyes just lit up. I know I’ve mentioned this in a previous post, but it was just the most satisfying service to be able to provide.

Remember Alex, the 11 year old Quechua speaking student from Cachin? Well he got permission from his parents to accompany us to Cachoyac to work as an interpreter. He worked with me for part of the day, translating from Quechua to Spanish. He is one of those people who shines from the inside. He immediately connected with the patients, made them feel comfortable, helped them into the chairs, and spoke with kindness and compassion. All this in an 11 year old! I was so impressed. Here he is helping one of the patients with his vision screening. 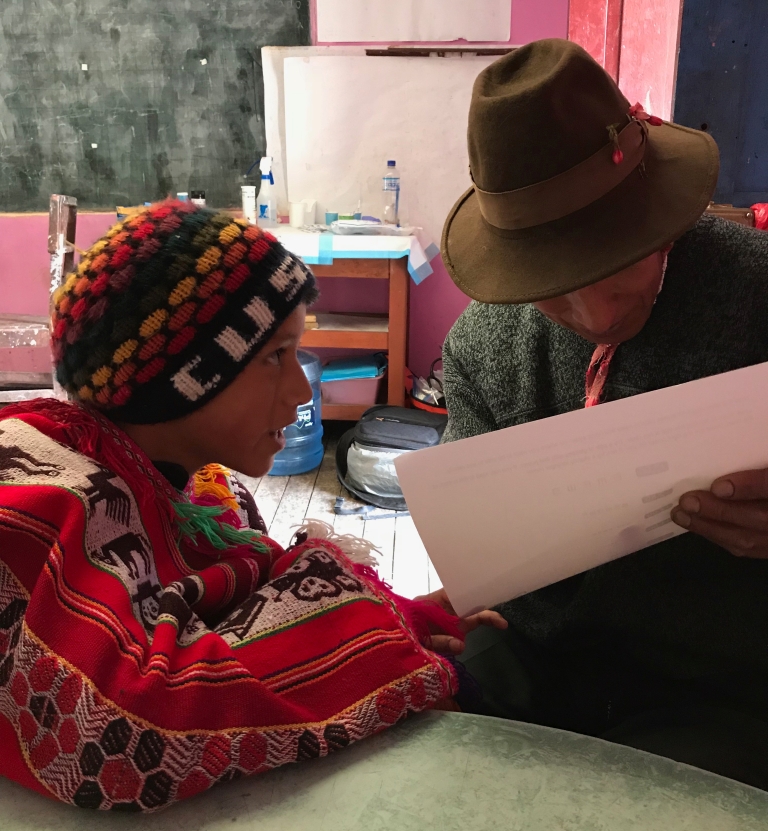 Another satisfying patient of the day was in the station across from me. An older gentleman came in with a chief complaint of hearing loss. My colleague Steph took one look in his ears and diagnosed a serious cerumen problem. Ear wax! She took him outside and with a stellar support team, lavaged the heck out of his ears. After that she checked his vision, set him up with reading glasses and as a bonus threw in a pair of sunglasses to help his burning eyes. He was so happy.

Outside of the clinic classroom, there were all sorts of things going on in the school courtyard and field. Cyndi was running her ever popular foot care classes, massaging and deep moisturizing the battered feet that result from mountain living. The people wear sandals called ojotas, made from discarded tires. Rain or shine, cold or warm, farm or home, walking or running, day or night, this is what they wear. As you can imagine, their feet and toes take a beating. The ojotas don’t offer a lot of protection, and their skin is exposed to dirt, wounds, and the relentless elements of wind, cold, and dry air. Later that evening I would tend to a deep wound on one of the kid’s feet because of the open shoes. Our team leader mentioned that with previous teams the foot classes didn’t go so well. She attributed it to the fact that the educators often told the people they should wear a different kind of shoe–one that covered and protected their feet. While well meaning, this advice did not take into consideration the cultural context of these shoes. Almost every single person living in the high Andean communities wears these shoes. To say “don’t wear them” is akin to saying don’t breath. It is just what they do. Cyndi did an amazing job of respecting the cultural norm, and meeting the men and women where they were. It was beautiful to see a circle made up of us and them, cleaning between their toes, clipping toenails, massaging the thick cream into their cracked skin, and smiling all the while. 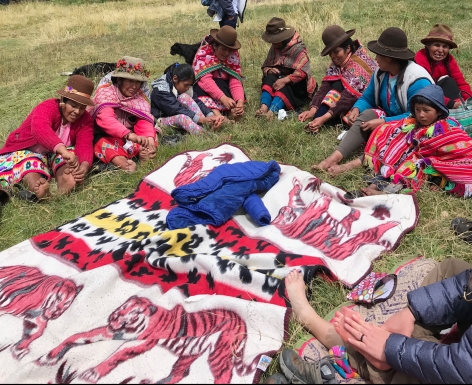 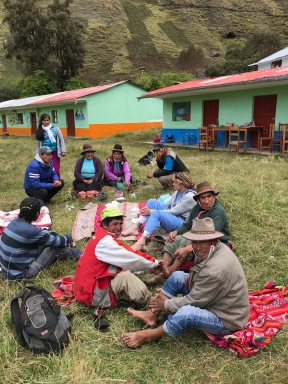 There were also back pain classes going on in one corner of the field. By now the interpreters didn’t even need to interpret–they could lead the classes from all the practice they’d had in the days before. Todd, the back pain guru, would kneel and squat, and stretch, and massage, and demonstrate all morning long with a giant smile on his face. Many of the men not only work in the fields, but also work as porters for the tourists who come to Peru to hike the Inca Trail. The porters load their backs with camping, cooking, and hiking gear so that the tourists don’t have to. They wear their tire sandals and carry 50 pound loads up and down the mountain trails. One of my patients told me his back only hurts during his once a month Inca Trail trips. I gave him enough Ibuprofen to use three times a day, five days a month for the rest of the year. He was so grateful.

Steph led several stretch/yoga classes. Again, the circle was made up of locals and the PHH team–everyone out there together stretching and posing. I loved seeing the women in their multilayered skirts doing downward dog and sun salutations. Here is a short clip from one of her sessions.

In addition to clinic and education, there was also time for fun with the kids. The team brought beach balls, coloring books, and new colored pencils and markers for the kids. Some of the team members were particularly suited to playing with the kids: gentle giants (Josh), and that special kind of adult who is still a kid at heart, or maybe really is just still a kid (David). 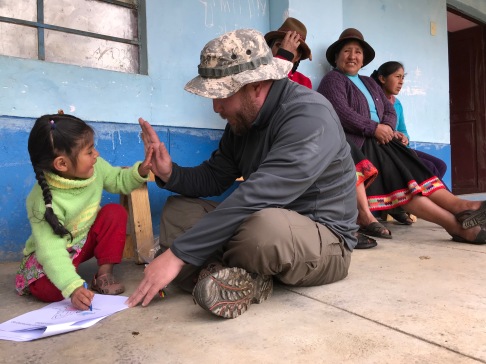 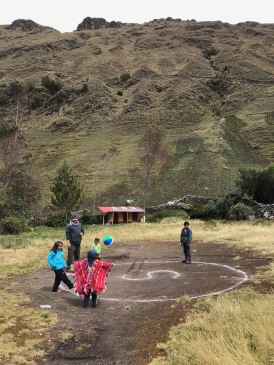 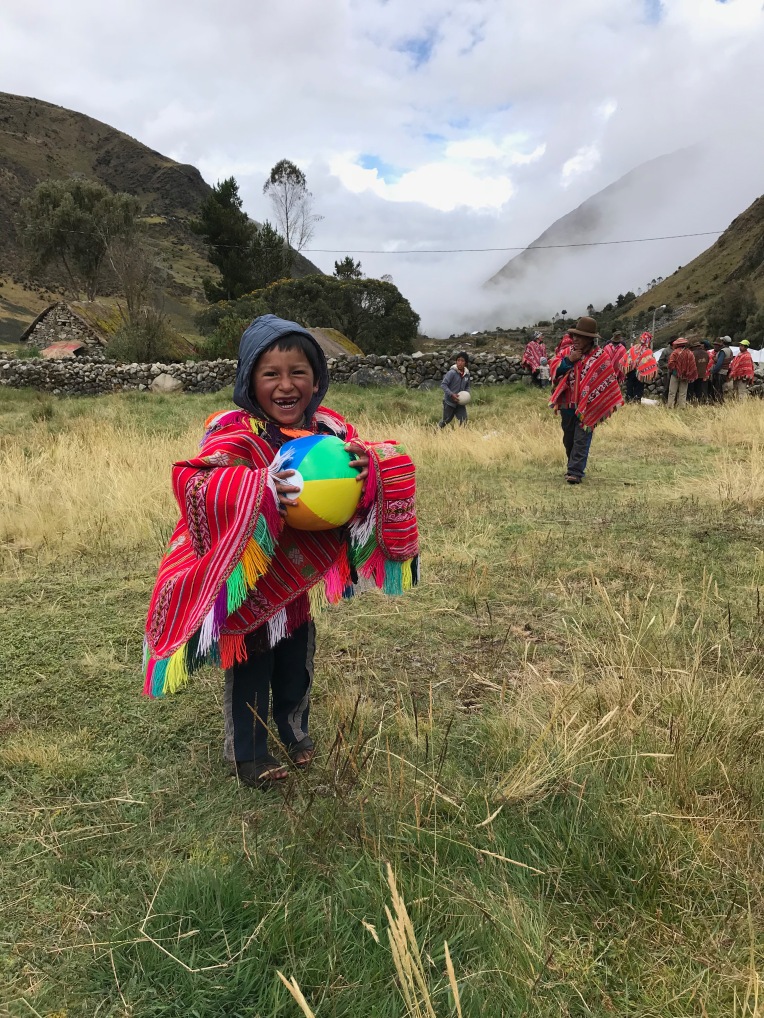 And then of course there was the spread of woven goods for sale. Many of the team members purchases scarves, shawls, hats, etc. I realized that I had sent all my money home with Jeff by accident, so I didn’t buy anything, but it didn’t stop me from window shopping during my lunch hour. 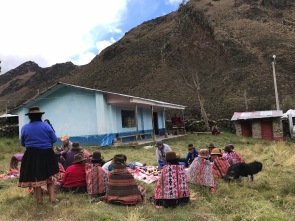 As clinic was winding down for the day, we heard there was going to be a ceremony in the afternoon. Of all the days to be in Cochayoc, we had the incredible luck to be there on the day of the Celebration of the Llama. The universe aligned in just the right way, and what followed was an unforgettable experience.